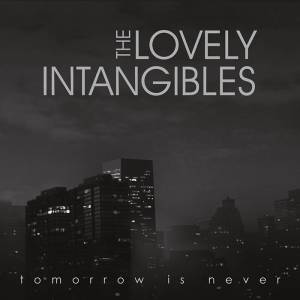 Before hearing a note, the pedigree of The Lovely Intangibles should compel even the most jaded music snob to un-hunch their shoulders and take note.

With three members of The Lost Patrol (Stephen Massucci, Michael Williams and Tony Mann) and former Dotsun Moon vocalist Mary Ognibene forming the core unit, The Lovely Intangibles are in essence the auditory equivalent of a shuffled deck. Throw in a guest appearance by Renaissance bass legend Jon Camp and you’ve got an international incident on your hands.

These musicians are smart enough to play to their strengths on “Tomorrow Is Never”, yet this assemblage boasts it’s own identity. It would be silly to say fans of The Lost Patrol or Dotsun Moon wouldn’t want to inhale this album, but the resulting work has a unique sound that doesn’t merely mimic what it’s creators have done in the past.

Whether it’s the creeping menace of “It’s Just Like You” or the interstellar lushness of “Relapse”, The Lovely Intangibles construct perfect little ear movies. Massucci’s electric guitar work conjures images of ghosts partying in the dessert, while Ognibene’s voice is nuanced, powerful and inviting. At the base of it all, Williams’ acoustic guitar textures and Mann’s drumming form the perfect floating anchor.

At this point it’s too early to tell if The Lovely Intangibles is a momentary detour or a totally new mission for everyone involved. No matter what the future brings, this is an album that delivers from every angle. To sample the album, visit https://thelovelyintangibles.bandcamp.com. 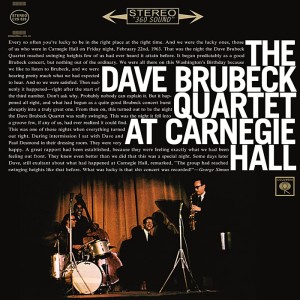 When “At Carnegie Hall” was recorded in 1963, the Dave Brubeck Quartet was at the height of its powers. Four years on from the pop success of the “Time Out” LP, one of the all-time great jazz groups decided to commit one of its legendary live shows to tape.

Some jazz purists idiotically denounced the DBQ as a pop act, but after listening to the Herculean group interplay on these live versions of “Blue Rondo a la Turk,” “It’s a Raggy Waltz” and “Eleven Four” renders any detractors mute. For goodness sakes, “Blue Rondo…” was so ahead of its time that Emerson, Lake and Palmer’s version recorded roughly a decade later is (except for the amplification) identical.

The group captured on “At Carnegie Hall” is the quintessential DBQ lineup: Dave Brubeck (piano), Paul Desmond (saxophone), Eugene Wright (bass) and Joe Morello (drums). There is no greater sound in jazz or any other type of music than the combination of Brubeck’s massive, melodic chord work meshed with the exotic, airy alto sax of Paul Desmond. Just listen to the accessible but mysterious melodic groove of “Take Five” to hear this band’s masterful blend of innovation and digestibility.

The Dave Brubeck Quartet served as a gateway drug into jazz for many avowed non-jazz fans. “At Carnegie Hall” isn’t just a bunch of musos trying to out-solo one another, but rather a band working with and off of one another. The innovations these four musicians made under the umbrella of jazz rank neck and neck with the stylistic innovations of John Coltrane, Miles Davis and Charlie Parker.