The recent rash of shark attacks along the North Carolina coast was at first believed to be a natural phenomenon.

“Some people thinks it’s down to water temperature or the over-harvesting of fish along the coast,” said Topher Grace of the NC Wildlife Commission. “My personal belief was that the salty residue from fast food packaging that ends up in our waterways had lured the sharks further inward. I mean, would you rather eat raw fish or a Big Mac?”

While the shark attacks have been a detriment to coastal commerce, water park memberships in NC have risen 300 percent over the last two months.

“We’ve had to hire extra lifeguards to keep up with all of our new members” said Kurtwood Smith of Point Place Water Park. “We haven’t had time to train them properly, so until they’re up to speed we’re having to keep water levels at a maximum of three-feet. It makes diving a challenge but safety is our main concern.”

One of the new members of the Point Place Water Park is retired investigator Laura Prepon.

“I’d planned to take my granddaughter to the beach but the shark attacks scared me off,” Prepon said. “Nothing seemed out of the ordinary at first. We enjoyed our time at the Point Place Water Park but being a former cop I started to notice a disturbing pattern.”

Prepon said every Tuesday around noon an aggressively intoxicated woman would walk into the park office and leave five minutes later with a plastic Walmart bag stuffed with cash.

“It seemed odd that a person who could barely walk would be given a large sum of cash in a plastic bag,” Prepon said. “The woman seemed nice enough but on her way to her car I heard her belched every bit of Pink Floyd’s ‘Comfortably Numb’ – including the guitar solo.”

“I followed her all the way to Emerald Isle,” Prepon said. “She parked at the Rogue Inlet Pier and pulled a large cooler on wheels from the back of her truck. Within a few minutes she made her way to the end of the pier. She propped up a fishing pole to blend in with the other fishermen, but when she thought no one was looking reached into her large cooler and tossed three sharks into the ocean.”

Prepon discovered the mystery shark lady was Paulette Burroughs, 39, of La Grange. A former concierge for the Kinston Free Press and seven-time girlfriend of Rick James, Burroughs currently holds the record for misdemeanors in North Carolina.

“Extortion, pyromania, cattle mutilation – this Burroughs character has done it all,” Prepon said. “This woman once shoplifted a waiter.”

Surveillance photos Prepon took of the alleged shark dump were too fuzzy to be submitted as evidence, but late last week Burroughs incriminated herself in front of several witnesses. The following text was taken from a police report:

“The suspect (Burroughs) was observed acting in an erratic manor due to ingesting what toxicology reports indicate was a mixture of Budweiser and lighter fluid. Based on our investigation, Burroughs mistook the Point Place Water Park for Emerald Isle and dumped three sharks into the kiddie pool. The sharks were not aggressive due to Burroughs decision to share her drink with them.”

Witnesses reported children initially believing the docile sharks to be flotation devices left behind by the previous day’s patrons.

“My son ran up to me and said the shark float smelled like her daddy,” said Debra Jo Rupp of Kinston. “I walked over to take a look and realized it was a real shark. I was frightened for a second but then realized the shark was Otis-on-a-Saturday-night-in-Mayberry drunk. Somebody should really get that thing to a meeting.”

As of this writing the case is still under investigation.

Jon Dawson’s books available via the BOOKS link at the top of this page. Contact Jon at jon@thirdofnever.com.

We’d like to introduce new sponsor Blizzard’s Building Supply of Kinston. Located at 405 Walston Avenue in Kinston, Blizzard’s is a family owned business that has been going strong since it’s establishment in 1959. Personal service, quality products and competitive prices have helped Blizzard’s become a local institution. Whether your project is large or small, give Blizzard’s a call at (252) 523-5181. 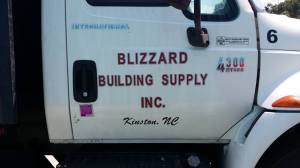